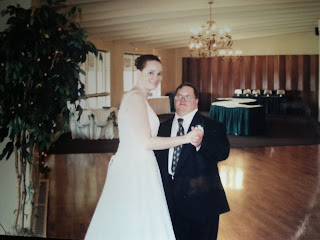 I have been away due to the death of my brother Bryan.  I got the call on Oct. 1st that he died on Sept. 30th.  My mom & I drove up to Columbus, Ohio for the funeral.  We had to be there the next morning for the funeral so it was just the two of us going to Ohio.  Bryan and I share the same mom, but not the same dad.  So we headed up Tuesday evening.  The funeral really wasn't a funeral, it was a showing for immediate family only.  If it had been a funeral for everyone to come and pay their respects I'm not sure if there would have been a funeral home that could hold everyone that would want to come and say goodbye.  Bryan was much needed in our lives and he touched everyone that he met in a profound way.

My brother had been in the hospital for over a week and we didn't know about it nor did we know about his prior stroke and health problems.  I'm not sure why no call was made to my mom to let her know or to my brother that was living in Columbus.  We were not able to say goodbye to him in the hospital.  Some would be furious, but I was not.  I don't have any control over the decisions of others and I would not want to devote my energy to anything other than remembering my brother.  After hearing the story of what happened, yes I got the details again, it would have been one of the hardest things to see.  There was pain and some seriously crappy circumstances when he got to the hospital that I would have lost any composure I had in those moments. Although, near the end he was on pain medication and at the end he was waving and blowing kisses.  This was my brother, such a happy person.  I think that in those moments he was saying goodbye to those in the room and hello to those who were coming to help him along to the next part of his journey.

Bryan was 49 years old.  My brother was one of the most amazing and sweetest people that I have ever known.  He had Down Syndrome, but was not defined by it.  For those of you that don't know much about this it's considered a birth defect, but it is no defect at all.    God doesn't make anything that is defective, everything He makes is on purpose and for a reason.  John 9:1-3 "As he went along, he saw a man blind from birth.  His disciples asked him, 'Rabbi, who sinned, this man or his parents, that he was born blind?' 'Neither this man nor his parents sinned,' said Jesus, 'but this happened so that the works of God might be displayed in him.'"  It is a shame that many miss what God is doing in the lives of people with special needs, they make fun of them for being different, yet they probably won't be as "perfect" in Jesus as those they make fun of.  In many countries, even America, there is an image problem with our ability is see beyond some one's disability and be able to see them as they are meant to be seen.  Someone told my mom to put Bryan in a home, thankfully she never listened to anyone, but God.  Those people saw him as a challenge.  What if God sent him to us as a challenge?  To challenge our ideas of the right kind of child, sibling, student or friend. To challenge our beliefs, our thoughts and our minds. 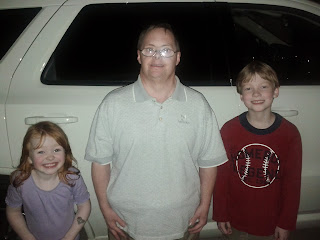 The difference between us & those with Down Syndrome is just one extra chromosome, they have three copies of chromosome 21 instead of two.  I'm a bit OCD and think a lot about numbers.  Seven is the number associated with Jesus, the perfect number.  7 x 3 = 21, 7 (the number of perfection) x 3 (the number of the trinity & # of chromosomes) = 21 (21st chromosome).  OK, this might be a bit out there, but it just came to me and I never would have thought of that before.  God has the longest symphony in history and He uses all instruments to create a masterpiece.

I did not see him as often as I would have liked, but he is such an important part of who I am.  He taught me to love others regardless of looks, beliefs or abilities.  To laugh often and have joy.  He made such a deep impact in the lives of those around him that he would never know the blessings that he bestowed on all of our hearts.
Posted by BeautyforAshes88 at 3:08 PM