"It's not that I'm so smart, it's just that I stay with problems longer."

OK, Einstein was extremely smart and apparently humble too.  This is a great quote for perseverance.  He was thought to be strange because he didn't speak until he was 4 and his teachers didn't think he would amount to much.

Imagine all the things that might have never happened or been delayed for decades except someone tried one more time.

Thomas Edison's teacher said he was too stupid to learn anything, he failed 1,000 times trying to invent the light bulb.

One of my favorite actors, Sidney Poitier was told he was wasting his time at auditions.

Lucille Ball was told that she should choose another profession.

Walt Disney was fired by a newspaper for lack of imagination.

Robin Williams, another of my favorite actors, was voted "least likely to succeed" in high school.

Decca Records turned down the Beatles because they didn't like their sound.

Elvis Presley was fired after a show and told he should be driving a truck instead.

Beethoven was told he would be hopeless as a composer.

Leo Tolstoy was told that he was unable to learn.

Dr. Seuss was rejected be twenty seven publishers for his first book.

Each of these people decided to not let the world pen their story, they did not accept defeat.

Even if everything around them pointed otherwise.

If they had we would never know their names.

We may never be on this list, but that does not mean that we should give up when faced with failure.  Who knows what each one of us could do if we did not let our failures define us and instead we let them show us the way to where we were meant to be after all.

Each failure is a stepping stone to our future, it's just that through the fog we can not see the place the stones are leading us to.  The other side of the river is there whether or not we decide to step out in faith.

To read about these and more amazing people check out this list from the University of Kentucky, click Here.

Posted by BeautyforAshes88 at 9:54 AM No comments:

Email ThisBlogThis!Share to TwitterShare to FacebookShare to Pinterest
Labels: Quotes

"Do not ask God to guide your footsteps if you are not willing to move your feet."

I saw this quote from an email from Brook Noel, a pro at organizing and motivating people to live their best life.  I am often guilty of praying big, but not actually doing any steps that would get me to my goal.  We are creatures of habit and it is difficult to get out of a rut.  I know better when I'm praying and probably shouldn't even pray certain prayers if I am unwilling to take action.  I know I'm not the only one with this struggle, right?  Hopefully we all can pray then act on what God is leading us to do.  Sure God can do anything, but we also need to take responsibility for our part of the relationship with Him.  To grow in God means we are to have faith in Him, but we also should be using the gifts and abilities He has given us.

He gives us free will and we choose daily what are the most important things in our life.  Let our actions match our best intentions.
Posted by BeautyforAshes88 at 6:49 AM No comments:

Email ThisBlogThis!Share to TwitterShare to FacebookShare to Pinterest
Labels: Quotes 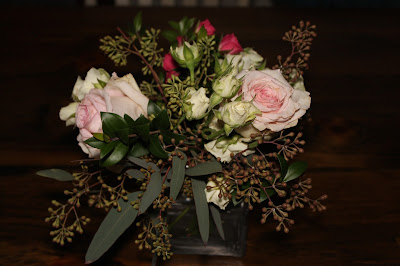 I trimmed a bouquet of flowers and decided to put them into a smaller vase.  OK, don't bash on my mad flower arrangement skills:)  When I started to put the flowers in the vase they kept falling out.  The vase is short and wide so there was nothing for the flowers to hold on to, but when I put enough flowers and greenery in they started to stay put.  The flowers could not stand on their own, but found support in the other flowers that surrounded them.  I look for lessons in everyday life that I can use so I can understand and learn more about God.  I think we often do not see some of the simple things He is trying to teach us.  God does not intend for us to do life alone.  After the IF:Gathering this past weekend this was a fitting example of community.  Many are often afraid to ask for help or to reach out.  We are called to be a light for those who do not believe, but also for our sisters during the dark times.  To help each other is a blessing because sometimes we are on the needy end and other times we help those in need.  This is a beautiful way to show God's love.
Posted by BeautyforAshes88 at 1:34 PM 2 comments:

In case you were not able to watch the IF:Gathering 2016 this weekend there is still time to watch.  Here is the link to watch the four sessions.  http://livestream.com/ifgathering  You will have until this Monday night at midnight to watch for free.  The leaders were some of the best from around the world and it will be just about the best use of your time for the entire year.  So please watch the sessions and if you are feeling God moving you then go to where He is calling you.  The world has not seen yet what women can do if we unite together locally and globally to do God's work without us getting in our own way and being over run by fear.  Ladies we can be one of the most powerful forces on the planet.  I will be watching again this weekend because the amount of information is overwhelming.  Hope you will enjoy, grow, be challenged and take action.
Posted by BeautyforAshes88 at 7:13 PM No comments: